Hello all,
I don't know how to make music reviews but I'm certainly going to try.
Today's review is of the new Arctic Monkey's record "Suck It And See" 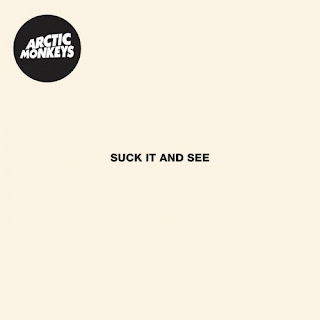 So I've been listening to the Arctic Monkeys since late 2006.  I've pretty much enjoyed every album they've released since then... They are probably one of my favorite British Indie/Pop Rock 'imports'...  They've recently released a record called "Suck it and See", Now despite what this says it sounds like you've stumped into the hustler catalog.  But actually, this is a very solid, cohesive album from start to finish.  For anyone who is familiar with the band, you will notice a return of a lot of the old classic jangly fender guitars and high energy, tight as you can get percussion.
Now the one main thing that seems to be different about this album is the lead singer Alex's vocals are a lot smoother and less of that thick, edgy cockney accent that listeners have grown used to.  This album feels like overall a more mellowed Monkeys but still the energy is there and I do deem this quite worth listening to, no matter what genre of music you are into.
My favorite song on the record has to be "Don't Sit Down Because I Moved Your Chair" The thing that really shines on this album is Alex's vocals.  The lyrics are still great as usual.  If you've never listened to the arctic monkeys before I would recommend listening to the 2 previous major label releases to get a vibe and it will help you build up to this record a bit easier...
I GIVE THIS RECORD A 4/5.
Now this is pretty generous, it is my first review
Future reviews might not be so nice!...
Here is the video version of my review:
Here is a video of the song "Don't Sit Down.."
Tomorrow's review will be:
This is the Second Album of a band called Adebisi Shank - by Adebisi Shank
If you have any suggestions for a mainstream band or artist that has a record released in the last year (Starting with the letter B!  please leave a comment here or send me an e-mail with a bandcamp link or any way I can check the album out!  If not I will pick the record myself.  Thank you very much!
Posted by RSFable & JMS at 8:52 PM

RSFable & JMS
my name is Robby, I'm 24 years old, I'm trying to keep life interesting, I write, record, perform and do a lot of things related to music.

...and my name is Joey Schultz. I'm 23 years young, I have an awesome hat with lots of pins on it. Music hates us.